Zumbi – known also as  Zumbi dos Palmares was born in the year 1655 in Alagoas in one of the huts of palmares. the word Zumbi or zambi, comes from the African language Quimbundo and the term zumbe means ghost, spectrum, soul of deceased.

Zumbi was captured and delivered to a missionary Portuguese (António Melo) when he was approximately six years old. He baptized in the Catholic Church with the name of Francisco. Zumbi received the sacraments, learned Portuguese and Latin and helped daily in celebration of the mass.

In the year of 1670, when Zumbi had 15 years he escaped to Quilombo dos Palmares. With 20 years old he was recognized as military strategist and warrior who fought against the soldiers of the Portuguese sergeant Manuel Lopes.

in the year 1678, The leader of the Quilombo at the time (Ganga-Zumba) was called to negotiate with the governor of captaincy of Pernambuco (Pedro de Almeida). trading consisted in the proposed that blacks of Quilombo dos Palmares would be free. the leader accepts, but Zumbi went against him because believed that the fight was something bigger, not only for freedom of blacks from Quilombo dos Palmares but for freedom of all blacks in Brazil.

Fifteen years after Zumbi have assumed the leadership, the bandeirante Paulista Sundays Jorge Velho was called to organize an invasion to the Quilombo. in February 6, 1694 the capital of palmares was destroyed and Zumbi wounded. Zumbi was betrayed by Antonio Soares, and surprised by captain Furtado of mendonça in his stronghold. Zumbi died with Twenty Warriors on 20 November 1695. His head cut, Salt and taken to the governor Melo de Castro. In Recife his head was exposed in a public square in order to deny the belief of the population about the legend of his immortality.

Zumbi is considered one of the great leaders of our history. symbol of resistance and anti-slavery, fought for freedom of worship, religion and practice of African culture in Brazil Colonial. the day of his death, November 20, is remembered and celebrated in throughout the country as the day of black consciousness. 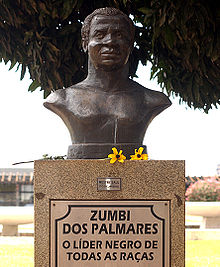